Trending
Scottish Football news from NewsNow
You are at:Home»Latest News»So just who are Borussia Dortmund, and how good are they?
By Kyle Barber on May 7, 2011 Latest News 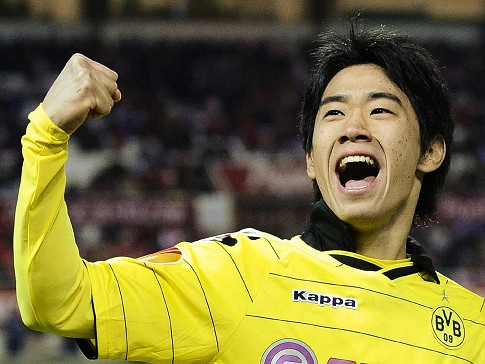 Nine years after their last domestic triumph of any kind, and fourteen years on from being European and Intercontinental kings, BVB have finally ascended back to the top of German football. But, with the Bundesliga perennially seen as a lesser division amid the Euro-elite, the question pertains as to just how good the achievements of Jürgen Klopp’s men actually are.

Borussia (Latin for ‘Prussian’) Dortmund were founded as a Club in 1909, by a group of just eighteen young men who were intensely disaffected at the treatment they received from their local Catholic church group, who organised football training in the area up to that point. Originally sporting blue and white stripes – not dissimilar to the style of Sheffield Wednesday – the side reverted to their synonymous black and yellow in 1913. Dortmund went into the inaugural Bundesliga season (1963) as German champions, but would not prevail in the new set up for another 31 years. However, back-to-back titles then followed, and the 1997 3-1 Champions’ League victory over a Juventus side that included the likes of Zidane, Deschamps, and Vieri saw them reach an unprecedented zenith. Floatation on the stock market soon ensued (at the start of the 2001-02 season), as the Dortmund hierarchy attempted to adopt the model so successfully enshrined by Manchester United. What offered much promise, though, soon turned into the quintessential ill-fated venture, as incomprehensible financial mismanagement on the scale of Leeds United saw the single basket of Dortmund eggs crash to the ground in 2005, their share price plunging from €11 to just €2. On the verge of bankruptcy, the only step left to save the Club was to endure the ignominy of selling their Westfalenstadion home, and lease it back.

Much as the catastrophic situation of 2005 was the consequence of a decade of overstretch, so the 2011 triumph is a reflection of the subsequent reinvention of the Club, the brand, and the team itself.

Dortmund have been at the top of the pile in Germany since week nine of the 2010-11 season, displacing a Mainz side that had equalled the Bundesliga record of winning its first seven games. Having reached top spot by virtue of a tepid one-all draw with Hoffenheim, Dortmund then embarked on a winning streak that mirrored Mainz’s, and were ten points clear by the advent of the Winterpause. Many commentators took that enforced hiatus to prophet the inevitable demise of die Schwarz-gelben, their counsel asserting that such a young dynamic would suffer the pains of pressure and inexperience. The exact opposite of this was actually evidenced, as the team picked up in January where they’d left off, extending the gap to the chasing pack to a mammoth fifteen points by matchday 29. Despite a slight wobble – which saw this advantage cut to just five points at one stage – the title was secured courtesy of a 2-0 victory over Nürnberg, while Köln defeated Leverkusen – Dortmund’s only true challengers – by the same scoreline.

Reflecting immediately on the realisation of a season of such intense promise, Jürgen Klopp spoke of his relief, saying how he was simply “happy.” Though confessing he “thought it would feel more euphoric”, he was quick to pay tribute to his players, enthusing how “the way they have taken our direction and used it on the pitch has been incredible – they’re truly unique! It would have offset the laws of football if they hadn’t become Champions”.

Klopp’s effusive endorsement of his side carries the manner of a doting father, and that relationship is dutifully reciprocated by his charges, who readily speak with such high regard towards their coach. Lucas Barrios, fresh from netting the first strike against Nürnberg, credited his boss with giving him “the best day of my life as a footballer”. Kevin Großkreutz – a devotee to the BVB cause ever since he could walk – beamed how he felt like he “was dreaming”, before having his head shaved following a promise to do so having superstitiously grown it since before Christmas.

The vitriol of Dortmund was also manifold in the German press immediately after their triumph, with the team’s ethos and approach being heralded as emblematic of the wider renaissance of German football that was brought into such sharp relief in the global conscience at last year’s World Cup. Der Spiegel wrote of it as symbiotic of the “paradigm shift in German football”, while Club Sporting Director Michael Zorc heralded the achievement as “the biggest in the Club’s history”. Contrasting with the excesses of the mid-2000’s, the principles of the present side are evidenced through the scorer of the decisive second goal against Nürnberg – Robert Lewandowski, a striker signed from Lech Poznań for the princely sum of €4.5m, and who was playing third tier Polish football just three years ago.

Klopp’s impact and influence should come as no real surprise. He is a man who embodies the endeavour, resolve and attitude of the Rhine-Westpahlia region. An inherently grounded individual, the 43-year old has ensured that the ethics he holds so dear – commitment, strength of character, unity – formed the foundation for the on-field eleven. It was wonderfully fitting that the game in which the title was sealed was also his 100th in charge. In a reflective article on dw-world.de, Jefferson Chase highlights one aspect of this in what is referred to as ‘geil’ (German for: “cool”). As the factor he sees as quintessentially encapsulating all die Borußen of 2010-11 stand for, Chase waxes lyrical about Dortmund’s attacking flair and unbridled vigour that marks them out as one of the most attractive sides in Europe.

As much as the case for Dortmund’s success can be attributed to the impositions of Klopp’s geil-ness and his staff, some may argue that there is little substitute for – in the ilk of Rafa – cold, hard facts. So, to that end, here is a statistical overview of their domestic league season:

Under the guidance of the effervescent Stuttgarter (since May 2008), the current Dortmund side offer a vibrant, attractive, attentive brand of fluid football not incomparable to that of Arsenal; albeit more profligate as a result of their reliance on youth (only three sides have a worse shots-to-goals conversion rate). But that should not be taken to belie the fact that Dortmund’s success has come as a direct consequence of Klopp’s total, overt, unswerving faith in his playing staff. Where the distinction comes between the respective approaches enshrined by messrs Wenger and Klopp is in the belief instilled by them. While Arsenal’s ‘professor’ proclaims – often to excess – that his squad are good enough, Klopp comprehensively believes it, and has the substance that Wenger’s rhetoric lacks. And, in doing so, the aspect of youth is removed from the equation. It is simple: the players are good enough and, by definition, are old enough. Even long-term injuries to potentially pivotal individuals such as Sahin, Kagawa, Kehl, and Owomoyela could not distil the momentum of the BVB-freight train, as their unyielding exuberance bore fruit.

Ultimately, the position of this side in the annuls of Bundesliga history will be determined by their longevity. Against a backdrop of the last twenty years that has seen Bayern only once go more than two years without being Deutscher Männschafter, and has witnessed the likes of Bremen, Stuttgart, and Wolfsburg soar for single campaigns (with all three battling relegation this time around), there is a widespread enthusiasm for Dortmund’s enticing brand of play to stand the test of time. In the likes of Sahin, Götze, Barrios, Großkreutz, Subotić, and Kagawa they boast some of the brightest, most coveted young players in Europe at the moment. Holding on to this crop – along with Klopp – may present Chairman Reinhard Rauball with his greatest challenge. Also place into the broader spending frenzy the naïve joy with which he announced the Club as having “up to €10m to spend” in the summer, and their position to the behemoths of European football becomes clearer. UEFA’s financial fair play rules may yet come to their aid, though if – and it’s a big ‘if’ – they can stay together until they are implemented.

Dortmund will be formally presented with the Bundesliga plate on 14th May, and one thing is for sure; if Europe’s big boys underestimate the North Rhine-Westphalia side next year, they will be in for a big shock, and may just come unstuck. The same can be said on the domestic front for Bayern, Schalke, and the other more renowned German sides. For the sake of German football as a whole – in the year that sees them accrue a fourth Champions’ League spot – it’s to be hoped that the resurgence of BVB maintains, and the manner of Dortmund’s play remains undiluted and untainted in its youthful purity, forever fêted by the largest kop, and most unabashed supporters on the continent.